Doosan Mobility and JOUAV have partnered to develop “the world’s first hydrogen fuel cell VTOL commercial drone solution.”  The result of their collaboration is the DJ25: winner of a CES 2022 Innovation Award.

“DJ25 is the world’s first hydrogen fuel cell VTOL (Vertical Take Off and Landing) commercial drone solution,” says the CES Announcement.   South Korean Doosan Mobility have established expertise in hydrogen fuel cell drones: China’s JOUAV has partnered with companies around the world to bring their suite of robust VTOL air frames to the skies.  The DJ25 is the integration between the advanced PEMFC (Proton-Exchange Membrane Fuel Cell) technology to a VTOL air frame.

The DJ25 has a flight time of up to 5 and half hours.   Able to cover up to 500 km in a single flight, the DJ25 offers an ideal solution for long distance inspections, large scale site surveying, and mapping.

JOUAV CEO Ren Bin says that the innovation is a critical development for the drone industry.  “From an environmental point of view, hydrogen energy has zero emissions and no pollution,” he says.  “The DJ25 is the first commercial VTOL drone to use a hydrogen fuel cell, which could drive clean energy applications in the drone industry.”

In addition to the environmental benefits, hydrogen fueled UAVs offer improved performance.  “Hydrogen-powered drones are stable, easy to maintain, and the vibration reduction improves engine life,” says Bin. “The hydrogen fuel cell has an energy density of up to 500 Wh/kg, which greatly enhances the drone’s performance, allowing the DJ25 to fly up to 500 km.” 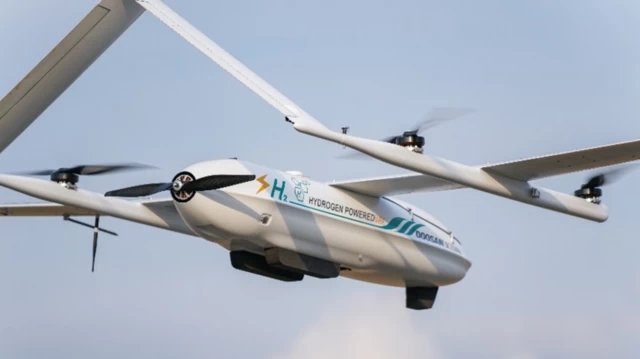