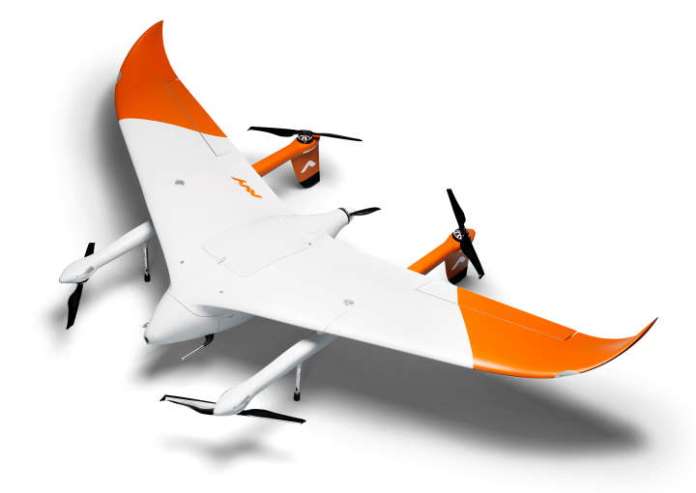 The release of a new drone solution that enables instant deployment of autonomous response drones for urgent and lifesaving missions.

Dutch company Avy, a pioneer in innovative aviation technology, has launched the first Drone Response Network combining docking stations with autonomous aircraft that have vertical take-off and landing (VTOL) capabilities. The implementation of this network offers ‘drone coverage’ in a certain area, enabling instant deployment to support medical deliveries or emergency services during critical incidents. It’s fit for purpose and ready for roll-out, with first flights taking place in the first quarter of 2022.

New Aera
The new Avy Aera aircraft is a real game changer. Where conventional drones need to be piloted manually and have a shorter range, this new generation drone is autonomous and has improved payload capacity, operability and reliability, carrying up to 3 kg of medical goods over a distance of 100 km. Moreover, the aircraft is ready for year round operation in rain and winds up to 45 kph. Designed to meet EU drone regulations and UN standards for aerial transport of medical goods. It has a suite of redundant sensors and communication links on board, it is ready for increasingly complex operations.

“We’ve taken all the lessons from being five years in this industry and shaped them into a new solution that will be revolutionary for urgent healthcare logistics and emergency services. We picked the colours for our launching drone to reference our investor Orange Wings, who has been by our side from the beginning,” says Patrique Zaman, founder and CEO of Avy.

Applications
Every year, 30 billion dollars are lost because (temperature-sensitive) medicines arrive damaged due to overexposure and delays during transport. The Avy Aera can have a positive impact on healthcare logistics, especially emergency care. For medical delivery, the drone is equipped with Aera’s Medkit. This new Medkit has a 4L capacity and is fitted with sensors for immediate assessment. Medical products remain cooled between 2-6 degrees for at least 100 minutes in an ambient temperature of up to 40°C. The Avy Drone Response network will be suitable for both urban and rural areas, delivering medicines, blood products, vaccines and other medical applications safer, twice as fast and more environmentally friendly than road transportation.

“Avy’s new aircraft will make a substantial contribution to achieving the goal of connecting hospitals and laboratories by air by 2023. The new Medkit allows us to transport medical products at the right temperature and for the first time we’ll be able to fly in urban areas, where the hospitals are located,” says Simon Prent, Drone Operations Manager from ANWB MAA.

The Avy Aera can also be integrated with a high zoom RGB and thermal camera system and used to quickly detect wildfires, spot people in distress at sea, monitor oil spills and assess the situation on the ground. This way emergency services can respond quickly, safely and effectively.

Drone Response Network
Avy’s Drone Response Network enables fast and quick deployment of the Aera for urgent logistics and emergency services. There is no need to assemble the aircraft or place the battery: it is ready for takeoff whenever it’s needed. This allows for centralised command of multiple drones in the network. Several stations can be linked together and act as nodes, enabling the drones within the network to cover an even larger area. By combining multiple stations and aircraft, Avy Aera can be deployed in minutes to cover large areas, providing real-time information to first responders. In a scenario where two drone stations and two drones are placed strategically, the network can cover an area of 1000 km2. The Avy Aera departs from its station within minutes, shortening response times and reducing costs for first responders.

Growth
ANWB, PostNL, CHC, Sanquin (the Dutch blood bank), Port of Rotterdam and Falck (leader in emergency and healthcare services from Denmark), are some of the companies that are already working with Avy to deploy Aera drones, because of the many advantages it offers.

“As launch partners we have entered into an innovative collaboration to benefit the healthcare sector. Avy and Falck share the same visions for the use of drones in the future, we couldn’t be more excited about the partnership. Our intentions with the new aircraft is to transport diagnostic samples and medicine in remote areas in Europe.” As stated by Nicolai Laugesen, Falck’s Head of Bid and Commercial Excellence.

Looking ahead to 2022, Avy will continue with its mission of making an impact with its Drone Response Network and expand within Europe and Africa.