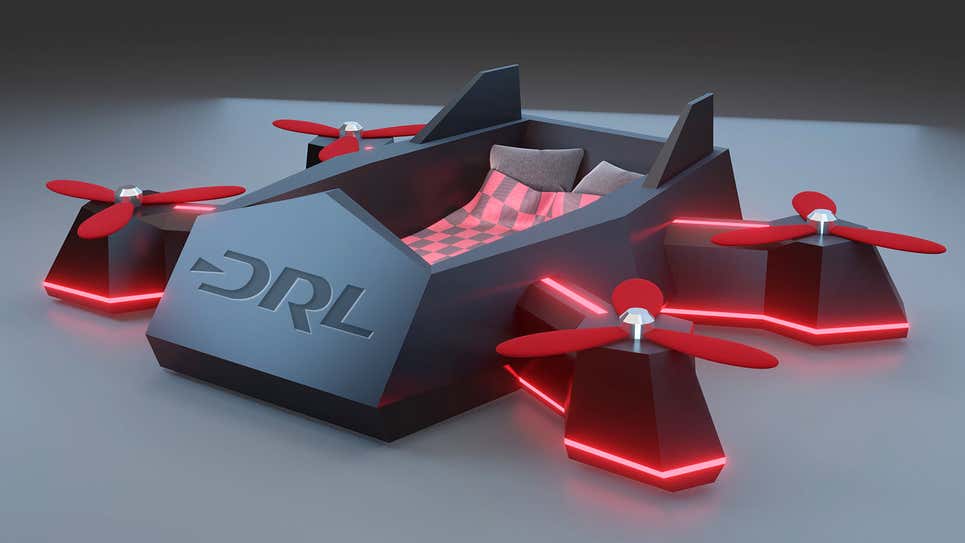 Can the continued popularity of motorsports be partly traced back to all the race car-shaped beds that kids of the ‘80s begged their parents for? The Drone Racing League sure hopes so as it’s created the modern equivalent—a bed shaped like a racing drone—in hopes of creating a new generation of fans that will grow up watching and embracing the young sport.

For those not familiar with the decades-old trend, toy makers like Hot Wheels realized that bedtime could be made more appealing by dressing up a bed with fake wheels, a fake steering wheel, and a fake dashboard so that climbing into bed felt like getting behind the wheel of a high-performance race car. (The questionable practice of kids learning to associate climbing into a vehicle with falling asleep was never addressed.)

For 2021, the race car bed has been replaced with the DRL Drone Bed. Its design is based on the Drone Racing League’s Racer4 quadcopter that competitive pilots race during the DRL world championship season. As you can probably imagine, the $25,000 bed, which the DRL refers to as the “ultimate holiday gift for the next generation of adrenaline junkies,” is a made to order luxury, so they’re not rolling off the assembly line by the thousands. You have until Feb. 1, 2022 to place an order, but available units will be very limited.

So what kind of bed does $25,000 get you? The bed is available in two sizes, twin or full, and is made of MDF with the Drone Racing League logo carved into the front. If you’re deciding where to position it in a room, you’ll need to take into account the four arms that stick out of each side, accented with glowing red LEDs and spinning propellers made from high-density foam. As furniture goes,it’s got a massive footprint, so those in an apartment or small condo will likelyhave little chance of finding space for it.

Other features include sleep masks designed to look like the video goggles used to pilot the drones, and the option to customize the bed with a TV mount at the foot for watching—you guessed it—DRL races. The bed is unfortunately only available for delivery to the U.S. (international parents are probably breathing a sigh of relief) and requires at least a couple of months to ship out after an order is placed. It doesn’t seem like a mattress, pillow, or themed sheets are included, which is unfortunate and kind of surprising given the exorbitant price tag.