Volocopter, the German leader in urban air mobility (UAM), has concluded the first test flight of its 2X aircraft in Seoul, South Korea. The event marked the first ever crewed public test flight of a fully electric vertical take-off and landing (eVTOL) air taxi in South Korea. The milestone test flight was witnessed by South Korea’s Minister for Land, Infrastructure, and Transport (MoLIT) Noh Hyeong Ouk, together with senior officials from the Delegation of the European Union to the Republic of Korea and the German Embassy. 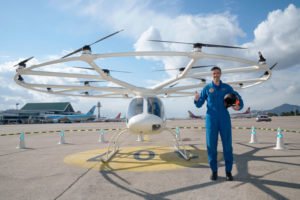 Held at Gimpo International Airport, the 5-minute crewed test flight covered a distance of roughly 3 kilometers, with the 2X reaching a maximum altitude of 50 meters and a maximum speed of 45 km/h. The flight was conducted as a part of the MoLIT’s ‘Open the Urban Sky’ UAM demonstration event.

“With MOLIT’s comprehensive K-UAM roadmap, South Korea is well positioned to achieve the goal of commercializing UAM by 2025,” said Volocopter CEO Florian Reuter. “We are extremely honored to conduct the nation’s first crewed public eVTOL test flight today and prove yet again that the future of air taxis is here and now with Volocopter’s aircraft. As the pioneers of the UAM industry, we look forward to working closely with friends and partners from both the government agencies and private sectors to make UAM a reality in South Korea.” 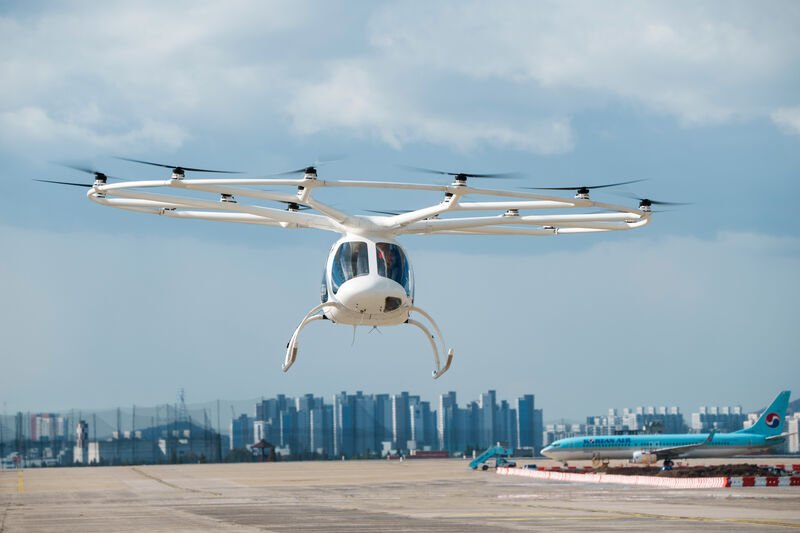 “2021 is a milestone year for the EU-South Korea relations, as it marks the tenth anniversary of the entry into force of the free trade agreement between the two entities,” said EU Ambassador Maria Castillo Fernandez. “We welcome continued collaborations in a wide range of sectors.”

“South Korea and Germany have enjoyed a close relationship for more than a century,” added German Ambassador to South Korea Michael Reiffenstuel. “We are connected by a common experience of a divided nation and strong ties in trade, education, and technology. We strongly welcome deepened cooperation in new sectors such as digitalization, e-commerce, and urban air mobility.”

Seoul is the second Asian city in which Volocopter has conducted a test flight; the first was the successful public flight trial over Singapore’s Marina Bay area in 2019, which was also the site of the company’s first full-scale VoloPort.

The company has been a trailblazer in the UAM sector with its family of electrically powered aircraft capable of transporting passengers (the VoloCity and VoloConnect) and goods (the VoloDrone). Volocopter is the only eVTOL company to date to have obtained design and production organization approvals (DOA and POA) from European Union Aviation Safety Agency (EASA).

Volocopter’s next public test flight is scheduled for November 16 at Incheon airport (weather permitting) during K-UAM Confex 2021, which will be attended by the President of Incheon International Airport Corporation, as well as the Mayor of Incheon Metropolitan City.